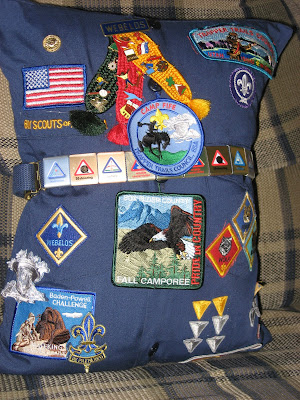 My Cub-Scout is done being a CUB and has moved on to bigger and better things. I was rifling through his things, getting ready to sew on some new patches for his scout shirt when I realized... wow, there are a lot of badges and pins and belt loops and hanging things and special patches and great scouting paraphernalia here that I have no idea what to do with it. After thinking about it for a few days I realized that those things will sit in a box and waste away without ever being acknowledged. So, I decided to make something out of it. The shirt was a hand-me-down (thanks Leslie) and I decided to use it as the backdrop for the project. I should have put a step by step tutorial like I've seen on other blogs.... sorry, I wasn't thinking about it at the time. I sewed on every badge he earned, pinned on every pin and arrow. Then I cut off the sleeves and shortened the length and sewed up the bottom and the top of the shirt. It became a pillow. I didn't sew together the front buttons so that I could use it to turn the pillow inside out, therefore I made a simple pillow form to go inside the shirt pillow. I threaded all the belt loops onto the scout belt and secured it around the pillow. I really like the way it turned out.

The true test of its worth was showing the boy. He really liked it as well. He was playing with another boy who is younger than him and just started scouts. He was so excited to see all that he could do in scouts. Mission Accomplished!
Posted by JENNY at 9:04 AM 2 comments:

JENNY
A day in my life includes, family, friends, work, play, and this blog helps me share good times with you.

websites I check out