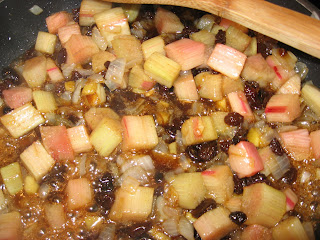 The fruit of choice: RHUBARB... 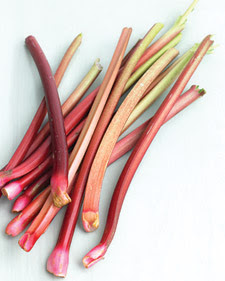 I remember eating rhubarb as a kid. We would just sit on the grass, near the garden with a salt shaker and peel the red outside skin off and shake it with lots of salt and eat it. I loved it. I was at the grocery store the other day and saw these big beautiful stocks of it and couldn't resist. So, I brought them home and peeled them and shook them with salt... and ....ewwwww.... man it was sour and almost pucker-y? So, I had to come up with something. I like relish with Ham or Pork Chops and thought... CHUTNEY! It was really good with grilled pork chops and I'm sure it would be even better with ham. So, here it is... 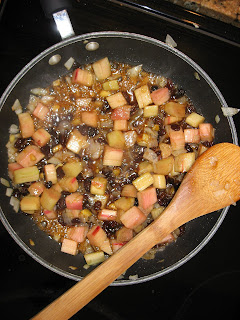 Rhubarb Chutney:
courtesy of Marth Stewart every day food
Ingredients
Makes 2 cups
2 tablespoons olive oil
1 medium onion, finely chopped
1 pound rhubarb, cut into 1/2-inch pieces
1/2 cup raisins
1/2 cup packed light-brown sugar
1 tablespoon peeled minced fresh ginger
1 cinnamon stick
1 tablespoon sherry vinegar
Directions
In a saucepan, heat oil over medium. Add onion and cook until softened, 5 to 6 minutes.
Add rhubarb, raisins, sugar, ginger, and cinnamon stick. Cook over medium, stirring occasionally, until rhubarb begins to break down, 6 to 8 minutes. Remove cinnamon stick and stir in vinegar. (To store, refrigerate, up to 5 days.) Serve with ham or pork and cornichons.
**I didn't have a cinnamon stick, and I think I might have added too much cinnamon... I just shook some in, so if that is the case for you... be careful not to add too much... go ahead, try it!
Posted by JENNY at 12:14 PM 1 comment:

JENNY
A day in my life includes, family, friends, work, play, and this blog helps me share good times with you.

websites I check out